I read this book a few years ago but decided to re-read it this Christmas alongside my Mum for a bit of fun and Christmas spirit! Also as I have only recently got back into reading I have never done a buddy read with my Mum and so this of course had to be rectified.

I did enjoy this book but definitely not as much as I did the first time I read it. It is definitely a really fun book and the romances are completely adorable but there are also a lot of stereotypes and potentially problematic elements that I did not notice when I first read this book, probably mainly because I was a lot younger and so just wasn’t as aware of such things. The main issues were with stereotyping such as cheerleaders, assuming they are all ditsy, unintelligent and just there to please the male characters. I did appreciate in the second story how one of the characters, the Duke, called this out sometimes but because the reasons she chose to take issue with these ideas were more self-serving and self-centred, it didn’t really feel like anyone actually cared about the strong stereotypes being made. 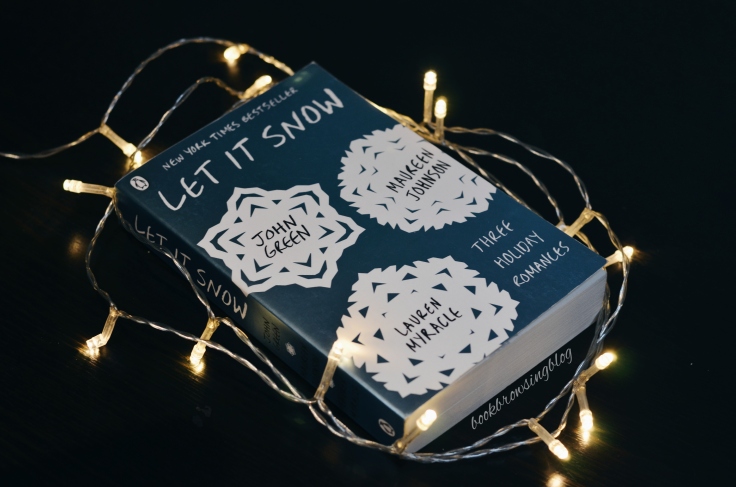 Of the three stories the first, by Maureen Johnson, was definitely my favourite by a long way! It was a thoroughly heartwarming story and I specifically adored Debbie, Stuart’s mother, as she was just the most caring and down to earth character I think I have ever come across and she was truly delightful to read about. Actually, Stuart’s whole family was amazing and I think that is one of the main reasons I loved this story so much. Also both Jubilee and Jed were really great characters and so all in all it was a fantastic story.

The second story, by John Green, was slightly underwhelming. I found it slightly boring that it used the ‘best friends that have been in love all along’ trope especially as I thought it was executed quite poorly. It was clear right from the start that the girl was interested in the boy and yet we spent most the story watching him finally realise he could potentially be interested in her. It also used a massive jealousy trope in that he didn’t even notice her until she showed interest in somebody else which I find quite unnerving as surely you should be more self-aware than that. So overall, although the end of the story was still very cute I didn’t think it was particularly good nor did it live up to the rest of John Green’s work.

The third story, by Lauren Myracle, was rather fun to read, especially as everything was wrapped up in a neat little Christmassy bow at the end, which always makes a story enjoyable. I also enjoyed the third story as the focus was more on one person and her relationship with herself instead of a romantic relationship between two people. Yes it was all in reference to a relationship, but I liked how it involved a lot of self-reflection as I feel that side of a good relationship is often lost and almost never discussed in writing. So although this wasn’t as good as the first story I thought it was an interesting read.

So, although this was a fun and Christmassy book to read it definitely wasn’t one of the best books I’ve read but it was definitely very interesting to read again a few years later with a different perspective.

QOTD: What book or series will always stick with you? The Raven Cycle is one of my all time favourite series, but something about the magic and the writing will mean it will always stick with me! It just really left a mark on me! Today has been super exciting, my new camera arrived 😍 I'm planning to restart my booktube channel and my current camera just wasn't going to give me the quality I wanted (and is on the road to breaking) so I decided to get a new one!! So exciting! . . #theravencycle #trc #maggiestiefvater #bookstack #favouriteseries #beautifulstack #stayhomeandread #bibliophile #readabook #bookcommunity #ilovereading
QOTD: What is a book you are sure you'll love but just haven't got to yet? I am certain I will love this book, it is LGBT+, light sci-fi, and just overall very well loved! But I just haven't picked it up yet! I will get to it eventually but I wish I would just get on and read it! Today has been fun, I've been working for the past few days on something super exciting and fun (possible related to restarting my booktube channel 👀) so it has been a nice change of pace! . . #wearetheants #cozybooks #cozyreads #cozyreading #bookstagram #wanttoread #toberead #tbr #bookcommunity
QOTD: Do you care more about beautiful spines or pretty covers? I personally care more about the cover, but I am such a sucker for a beautiful spine! You see them so much more as they face out on the shelves so it does make a lot of difference to the aesthetic of the book! Today's been pretty good! I got up early and got my work out of the way, and I've spent the rest of the day doing fun jobs like scanning all my books into Goodreads and reorganising my book cart! I do have a little more work to do this evening but I'm pretty happy! . . #bookstack #flatlay #beautifulbooks #bookspines #prettybooks #blackandwhite #bibliophile #cozyreads #thestarlesssea #wickedsaints #thenightcirus #adsom #veschwab #lainitaylor #daughterofsmokeandbone
QOTD: Paperback or hardback? For me, it's floppy paperbacks all the way! I find them so satisfying to hold and read! Today has been long... I'm working on my dissertation again and it's just insane the amount of hours I've put in in the last week and I'm going a little mad as a result! But in less than two weeks it will be totally done and I will be free!! . . #bookstack #flatlay #bookstagramuk #bookblogger #bookphotography #cozybooks #readinglife #bibliophile #booklife
QOTD: How do you organise your books? I honestly have a variety of ways! It includes areas sorted by colour, some by genre, some by author! I'm sure many people wouldn't understand how I know where my books are, but I can tell you the exact location of basically every book without looking! Today has been amazing! Late last night I finally finished organising my room! Since over a year ago my room has been in a constant state of chaos, but after small organisation sprees that didn't achieve much, it's finally done! It looks so amazing and is such a nice place to be, I'm extraordinarily happy! . . #blackandwhite #shelfie #bookorganisation #booklove #readingnook #stacksofbooks #bookstack #bibliophilelife #cozyreads #shelflove
QOTD: What is the last book that broke your heart? I was tagged by the lovely @lilas.books411 to answer this question, and j actually found it difficult to find an answer! But I think I'm going to go with My Dark Vanessa! This is such an amazing book, but it is heart-wrenching watching the main character's development throughout the book! Short caption today, I was up super late last night working and am not feeling great today, so I'm not on my phone as much, just trying to be kind of productive 😂 . . #veschwab #bibliophile #thedarkvault #thearchived #theunbound #duology #favouritebook #favouriteauthor #cozyreading #readingnook #beautifulcover
QOTD: Do you collect editions of your favourite book? I absolutely do! I don't do it for many books, only absolute favourites, but The Night Circus is definitely one of the books I own the most copies of! I have had so much fun collecting different editions of this book, I try not to bankrupt myself by buying too many new, and enjoy finding them second hand whenever I can! I really think The Night Circus has one of the most gorgeous covers, I love the simplicity of the idea whilst also having quite a lot of little details incorporated! And incase it wasn't obvious from my feed, I'm not the biggest fan of colour, so it's not surprising that I like a monochrome cover! . . #thenightcircus #nightcircus #erinmorgenstern #beautifulcover #blackandwhite #bookcollection #bookphotography #favouritebook #bibliophilelife #bookaddict #5starread
QOTD: Do you have any controversial opinions about books? I normally don't have many unpopular opinions when it comes to books, or if I do I don't feel too strongly! However, I love this series!! I completely understand why some people don't enjoy it and I can see the issues some people have with it, but personally I disagree! I thought this series was so gripping, such a crazy slow-burn, and also discussed many of the issues in a very sensible way that moves them away from problematic to an interesting topic! Today is such a fabulous day! I started the day feeling pretty ill but then my very broken phone finally got replaced and it's so much better, I'm so excited!!! . . #captiveprince #flatlay #flatlaybooks #bookseries #favouritebook #fantasy #romance #colourfulbooks #cozyreads #cozyvibe #bookphotography #royaltyromance